You can take the girl out of Brooklyn 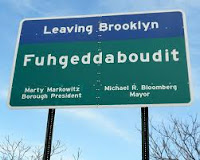 I was born and raised in Canarsie, a neighborhood in Brooklyn. My block, 95th street is where a minimum of 20 kids dwelled-all friends including two of my best to this day, Dawn and Nicole. Summer days and nights were spent on our block playing tag, manhunt, read light- green light…we were never bored.

We had some trusty characters that helped keep boredom to a minimum. Jerry the bum for one, who wasn’t truly a bum – but a man who worked in finance and lost his mind. Dressed in a suit everyday, he wandered around Canarsie and down our street daily. As out of sorts as he was, he was harmless. Singing Grandma was an older woman who lived one block over. She would walk up and down the block humming and singing. She never spoke a word to us. She too was harmless- as long as we didn’t speak to her!  C was my favorite. As a result of scarlet fever as a child, she suffered a terribly high temperature that left her brain damaged. She was a fun-loving, innocent thirty something year old woman that was very childlike. She lived two blocks down and was a 95th street staple. Everyone in Canarsie knew her and watched over her. She always had a smile on her face and was always laughing. Besides growing up with so many kids on my block, these are some of the memories I have of growing up in Brooklyn. There was always something going on.

I moved to Long Island (the suburbs) the year I got married. I love it here…but not like I loved Brooklyn. I’m here for seven years and as much as it feels like home- it’s not home. I don’t know the people in the stores like I did in Canarsie. I don’t see familiar faces in the playground. It’s different. In Brooklyn, kids played in the front of their houses. Here- everyone plays in their backyards. As much as I love my backyard, I would love to hear the sound of children laughing and playing in front of our houses as well. It’s just nice seeing people outside…guess living on a dead end doesn’t help matters!

I came here to raise a family and am doing just that. The schools are amazing and I hope they both get the education my husband and I came here for (and am paying for in the taxes!) I just also hope that they find lifelong friends like I have. I know that they will meet school friends- Chloe has already- but will it be the same? My block in Brooklyn was so tight knit- such a community. I fear that living here- my children will never have the childhood I had. My childhood was remarkable- ask any kid from 95th street and they’ll tell you the same.

The memories I have of being a kid, growing up on the block I did, are some of the best I have. I want that for my children because of how good it was. A firefly hunt/competition isn’t as much fun with just your sibling. 20 kids deep on a stoop eating Italian ices, coming in filthy from a long day of play, all being annoyed by the same nosy neighbor (yea- I’m talking to you Thelma!)…camaraderie.

I never heard the word “playdate” before moving to the burbs. We just played or went over each others houses. We weren’t ushered to and fro 3-4 different activities per week. We did kid things with each other. We didn’t need outside sources because we had each other. I want my kids to experience friendships the way the children of 95th street did.

As much as I know Chloe and Max will never have the childhood I had, a mom could only dream it will be just as good- if not better. It may not be like mine- but I hope their version comes close in comparison.

Winter Storms – Prepare now to relax and have fun when the storm hits
Read Time: 15 Min

WTF is This Stuff? Your Guide to Different Types of Acne
1
Top 6 Foods for Healthy Skin
2
Ten Ways to Get a Better Nights Sleep