I ran out of ways to say no!

I ran out of ways to say no!

Sorry guys, I have been a bad blogger! I kept up one review a day for a little bit and will start getting them up again real soon, for now I just wanted to share what I have been busy with for the past week!

My son went for a sleepover at his friends house, the next day when he called me I thought he might have been wanting to ask to stay over another night. Wrong! He was asking me for a puppy, which another friends parents were giving away. I told him No as many ways that I could. They are expensive. They are a lot of work. They get big. They Poop on the floor. They need to be walked, trained, and loved.

He had a come back for every argument I gave him. Every one! He even agreed to clean up his bedroom, which I shouldn’t have let count since his bedroom needed to be cleaned anyway but it is nearly impossible to get him to do it any other time. I told him to ask his Dad. Secretly hoping that he would come up with a way to say No…He went with the boys to look at the puppies and came home with this guy: 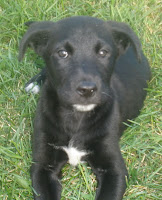 Then came time to fight about what to name him. We threw names around and someone had a reason for not liking each one. I had to go out so told them to decide before they went to bed, what did they call him? Crius. They didn’t like my suggestions of Thunder or Chaos but named him Crius? Why did I agree to letting them name him when I wasn’t home? Crius is supposed to be pronounced Cree-Us but I hated it, and my son was mispronouncing at as Cry-Us so that’s what stuck. I guess it isn’t so bad. Crius was one of the Titan Gods in Greek Mythology. Titan was another of my suggestions, so I guess they worked from that.

He listens very well already for only 7 weeks old. He understands come and sit, though he doesn’t listen 100% of the time yet. He goes potty outside as long as we take him out often enough. He needs to learn not to jump on the baby, he isn’t very big but he is big enough to knock her over.

I have been able to get the kids to do most of the puppy clean up, they still haven’t completely cleaned their room yet though. I really didn’t expect them to do everything, don’t tell them I said that though! The house really needs a big deep cleaning to get everything puppy proofed so will be doing most of that on my own. I have been trying to train him to sit, stay, and everything else. Going pretty good so far. My neighbor liked him so much he went and adopted his sister who was the last puppy of the litter left! They are lab mixes, ours was the only boy and the only black pup! The others were all Golden lab colored like the Mama dog. The Father dog is a black chow/lab cross.

This entry was posted in